Rookstock 2020, a fundraising gala benefiting Rooks County Healthcare Foundation for the expansion of Rooks County Health Center, will provide a wide variety of music and entertainment for attendees. Musicians from Rooks County or with ties to the county will perform during this year’s event on Saturday, May 2 in Plainville.

Headlining Rookstock 2020 will be Lucas Maddy & The Kansas Cartel! 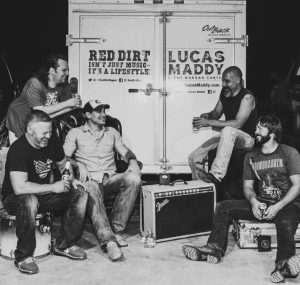 Lucas Maddy & The Kansas Cartel – an original, hard-rocking country band based in Kansas whose music can be found on iTunes, Amazon, and nearly a dozen radio stations in Kansas. Albums include “Reckless Disregard for Self-Preservation” “Believe” and the Summer 2015 EP “Oronoque” featuring “Bro Country” and “4440” currently playing on Midwestern stations.

Lucas began as a poet on a tractor, working the fields of Maddy Farms in northwest Kansas. His first efforts were written in marker on the inside of tractor windows as he spent hour after hour making dust in God’s country. A self-taught musician, Lucas picked up his first guitar at age 21 and turned a late start into a multi-state favorite. His first full band show was with legendary Oklahoma songwriter Mike McClure. Lucas soon became part of the new red-dirt revival in Manhattan’s Aggieville, where many artists cut their teeth, helping to kick-start the movement at Longhorn’s Saloon, a venue that would eventually spawn great Kansas bands Reckless Rebellion, Jared Daniels Band and Aaron Traffas Band, as well as his own.

Lucas has shared the stage with many major acts, including: Logan Mize, Cody Canada and The Departed, Randy Rogers, Stoney LaRue, Casey Donahew Band, Granger Smith, Aaron Watson, Rich O’Toole, J.B. and the Moonshine Band, Mike McClure, Jackson Taylor and Brandon Jenkins. This priceless experience has been invaluable in developing Lucas’ stage show, as “We bring a little of each artist to the stage with us”. He has sung the national anthem at the Wichita River Festival and Kansas State University Rodeo. Lucas and the KS Cartel will be rocking sound waves of radio all over the region and Venues in the Midwest with this Kansas rendition of County Rock.

In addition to live music and delicious meal and full bar, Rookstock attendees will enjoy live and silent auctions.

Tickets are now on sale at Rooks County Health Center or by calling Eric Sumearll at 785.688.4428.    Browse this website for more information.  www.Rookstock.com